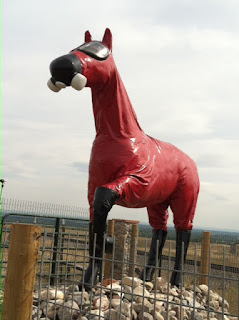 I've waited decades for a book like Full Body Burden, which spells out with appalling clarity the frequency and extent of release into its surroundings of plutonium created for bomb triggers at Rocky Flats plant in Front Range Colorado. I grew up in Boulder, twelve miles away. The author of this expose, Kristen Iversen, grew up next door to Rocky Flats, and downwind. She observes:

"The term body burden was used to describe the amount of radioactive material present in a human body, which acts as an internal and ongoing source of radiation. The DOE established a permissible "full body burden" for lifetime accumulation of radiation within the body on the assumption that a worker whose exposure did not exceed this level would not suffer ill effects... Exposure to plutonium was linked to cancers, brain tumors, and reproductive disorders, but plutonium was determined to be most dangerous when taken into the lungs. Particles of plutonium weighing 10 micrograms or less can easily be inhaled."

The sculpture Cold War Horse stands alongside CO Highway 72, a monument to Rocky Flats and its legacy.

As the population of the Denver metro area surges, open areas are irresistible to developers. Even now, houses are being built - and sold - on land almost certainly contaminated with plutonium and other toxic byproducts of its manufacture. The nuclear arms race pursued by our government and the unprincipled greed of developers have worked hand in glove to make land laced with waste that will be radioactive for 240,000 years seem suitable for homes, roads, hiking trails, and municipal water supplies.

The Front Range is windy, dry, and dusty. Plutonium's most deadly form is inhaled dust. After a hasty underfunded "cleanup" of the plant, site of numerous fires, spills, and other accidents, the DOE has turned over the property to the Department of Fish and Wildlife as a nature preserve. Scientists who conducted soil and water and sediment tests downwind and downstream from the facility have reported, again and again, perilously high levels of contamination. But lawsuits and reports seeking to tell the truth about these problems have been silenced in the name of national security, and their records sealed.

Yes, even the FBI, which raided the compound in 1989 to seize records pertaining to accidents, waste handling, and a culture of secrecy, after presenting findings to a grand jury, was prohibited from publicizing their findings. DOE continues to fund studies that find no health hazards in the vicinity of the plant, though independent investigations have repeatedly warned against plutonium in the soil, in the groundwater, in creeks draining away from the plant and water supplies into which those flow, and in the air - in a windy region.

Iversen interweaves her history of the plant with sketches of neighbors who worked there, and more poignantly, tells the story of her own family - her alcoholic father, depressed mother, younger sisters and brother, and the constant stream of animals sharing their lives. Her stories of the dogs, horses, and assortment of smaller creatures paint a vivid picture of children running free on open land, seeking escape and solace on galloping horses.  The secrecy in her home life, where drinking and its consequences were never mentioned, mirrors the imposed secrecy that made them believe the plant up the hill, run by Dow Chemical, was manufacturing cleaning products.

Ultimately, secrets must be exposed, their harm addressed. What you don't know can certainly kill you. Thinking of moving to Front Range Colorado? Read this book first!
Posted by NC Weil at 9:06 PM No comments: