Up in a pocket in the mountains
A place where no one's "just passing by"
The town of Crested Butte lies waiting
For ski-bums and villagers getting high. 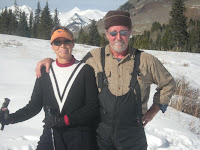 Fred and I came here to spend a week,
Shedding the pressures of daily lives
Flying on skis under cobalt sky,
Cheered when the youthful pair arrives.

Up the pass then, Heinz and I,
Exploring a nearby trek, we trailed
And found the powder, soft and deep
Up Gunsight Pass - till sense prevailed.

Cooking up feasts in another's kitchen,
Game hens and steak, cookies and pie,
Champagne breakfast and gorp for the trail,
Yes, you could say we're getting by.

Laughter and Scrabble and movies we like,
A record collection to explore
Canoe on the ceiling in this rental home,
Myriad joys - we'll be back for more!
Posted by NC Weil at 12:59 PM 2 comments:

I've found Owen Wilson to be more a pretender than an actor. But in Midnight in Paris he channels Woody Allen, down to the vocal inflections, neuroses and challenges to intellectual pomposity. And he's wonderful because the story is so good. A young man Gil (Wilson) and his fiancee Inez (Rachel McAdams) are visiting Paris with her parents. She drags him along to tourist sites with her friends Paul and Carol, but Gil would rather wander the city and dream. A successful hack screenwriter, he aspires to be a Real Writer, and one midnight an old Peugeot full of partygoers picks him up. They transport him to the 1920s where he is delighted to meet all the luminaries you know about if you love the era: Scott and Zelda Fitzgerald, Cole Porter, Hemingway (Corey Stoll), Josephine Baker, Picasso, Gertrude Stein (Kathy Bates) and Alice B. Toklas, Dali (Adrien Brody), Bunuel and Man Ray, "Tom Eliot", and an enchanting young artists' model, Adriana (Marion Cotillard), who helps him to see that his fiancee is not the right match for him.


The music, the lights, the costumes and laughter wonderfully evoke the Jazz Age atmosphere in which Gil immerses himself by night. During the day he dodges Inez and the pedantic Paul, using his midnight experiences to toss in some unknowable mots about the artists they admire from a safe and stuffy distance. While Inez and her mother furnish a house the young couple do not yet own in Malibu, Gil is eagerly rewriting his novel, which Stein is critiquing for him.

Woody Allen has been playing with history (and time itself) for much of his career, from parodies of historical figures in Bananas, Love & Death, Zelig and Broadway Danny Rose, to time travel in Sleeper and Stardust Memories. By elevating comedy to this level of enchantment, he has struck the truest note yet in his exploration of time, nostalgia and memory. We're with him all the way, bumbling along with 21st Century rube Gil in wide-eyed awe of a milieu just out of reach of our recollection, but legendary.

If you know nothing about the Twenties in Paris, you will miss many of the references, but maybe this charming film will entice you to find out more.

Up to now the book has been, with the exception of recounting scenes of war, somewhat dry: we linger in the salons of Petersburg and Moscow society, where snobbery and currying favor dominate, with jockeying for advantageous marriages and alliances that will lead to better positions. Tolstoy shows us how stultifying it all is - Pierre, now a Mason, walks through this phony maneuvering with the social clumsiness of a man who cannot conceal who he is.

But in Book II Part Four, Russia herself comes to life: Andrei Bolkonsky, whose wife died in childbirth, falls unexpectedly in love with the 16-year-old guileless Natasha Rostov, who in her enthusiasm, spirit and heartfelt honesty represents true Russia. The reader wants to stop the future for these two because their love is so painfully strong and direct - surely tragedy is drawn to such fortunates. Having secured her promise to marry, he goes abroad for a year in deference to his disapproving acerbic father.

Young as she is, she cannot stay gloomy waiting. And so we have the hunt: her brother Nikolai's passion for wolf-hunting galvanizes the household, and though it is not proper, no one can keep Natasha from joining in. She rides well, she doesn't impede the serious hunters, and afterwards they end up at the humble country place of their uncle. She eats the plain peasant fare with gusto, she dances a Russian peasant dance no one has ever taught her, she sings and plays guitar -
"She did [the dance] exactly right, and so precisely, so perfectly precisely, that Anisya Fyodorovna, who at once handed Natasha the kerchief she needed for it, wept through her laughter, looking at this slender graceful countess, brought up in silk and velvet, so foreign to her, who was able to understand everything that was in Anisya and in Anisya's father, and in her aunt, and in her mother, and in every Russian."

As though Tolstoy himself is enchanted by the vibrant young women of the Rostov household, he then gives us Christmas, when the young people join the mummers who come calling. With everyone in disguise, Nikolai Rostov, on leave from his regiment, sees his cousin Sonya distinctly as if for the first time, in her disguise as a Circassian man with a moustache drawn on her face in burnt cork. He is dressed as an old woman, and this pair who have grown up together fall completely in love. Though it is a disaster for his parents, who counted on him to rescue them from penury by marrying a wealthy woman, he must have penniless Sonya.

The joy we see in Natasha's vivacity and Nikolai's unabashed passions are tempered by their sense that never again will life be so wonderful. As readers, we have a similar dread: that not quite halfway through the novel, we have seen its most joyous moments. From here, surely tragedy and grief await us.
Posted by NC Weil at 12:29 AM 1 comment:

I wouldn't have seen this film if I'd realized it was a documentary – to me the charm of the 2007 indie hit Once was the story: An Irish busker – Glen Hansard – meets a shy Czech single mother – Marketa Irglova – who lives with her toddler daughter and an assortment of cheap-apartment-block denizens. He notices her playing piano at a music store, and convinces her to accompany him on some songs. Their chemistry pulls them into a hopeful relationship. Rarely does life make as good a story as a well-crafted fiction does. I already knew as much about Glen Hansard and Marketa Irglova as I wanted to. But I stayed. This film is about the success of the musical couple in the wake of their Oscar win for the song "Falling Slowly" from Once.

Popularity isn't for everyone, as soon becomes apparent. Intercut with performance bits and a lot of lounging around the random concert halls, hotels and bars familiar to any musical tour, were interview scenes. Those with Hansard's mother were particularly pointless. Overwhelmed by his Oscar, she opens the floodgates of her satisfaction and sense of immortality conferred by the award. But since Hansard, in solo interviews prior to her gushing, gives away her punch-lines, watching her teaches us nothing. Likewise, he explains his father was an undefeated boxer who turned down an invitation to compete in America – he used the excuse of his young wife being pregnant, but admits on camera that the only part of him primed for success was his boxing ability, and everything else was lacking. So he repressed his ambitions and became such a dedicated drunk that when he realized he was dying, he told his son he planned to spend the rest of his life drunk. And did. So when we see the former boxer, we have already been coached on what to think.

Marketa and Glen have some of the conversations any young couple does, who are serious about each other. In that sense their observations are both profound, because as each of us arrives at these revelations they have genuine power, and banal, because everyone has or should have exactly these thoughts: How much should I sublimate my own wishes to this other person's, so we can get along? Am I postponing expression of my true feelings because I believe this situation is temporary, when in fact our situation is what it will always be, precisely because it is an extension of who we are?

Her sweet and ringing conviction is that through all this discomfort of dealing with well-wishers and adulation, and the sense that she and Glen are growing apart because of these stresses and their individual maturing – despite all this she recognizes the breadth of their love, which she believes transcends this existence. Maybe they won't stay together in this life, but the next time around this love will draw together the different people they will be, and perhaps then they will be able to live in that love all their lives. So she hopes, and makes no apology for the way she and Glen are diverging.

He performs one song in a solo practice session, noting that it has a prophetic ring to it. "That happens," he says. "You write a song about an imaginary breakup – which is the furthest thing from what's happening with you in your life, and then it comes true." These two don't really fight, though the accumulated anger between them galvanizes their concert performances. Both seem too matter-of-fact and grounded to just explode at each other – he needs her to smile so she does. She's in love with him so she sublimates herself. And we can tell it won't last.

I have one catty remark, which is to say that Irglova's singing rides the edge of notes, which I found agonizing in her solos. One number in particular, with an out-of-key drum in the background, was really hard to listen to. Hansard shouts and plays his guitar furiously (though the camera does not show us his rapidly strumming hand, instead giving us a view of his elbow and shoulder), and his out-of-tune singing occurs deliberately. We know he can hit those notes when he wants to. But her voice has the uncertainty of someone unschooled in vocals, who sings as an adjunct to her piano and guitar playing. She sings somewhat better than I do, which I'm sorry to say is not a compliment.

If you are interested in the achievement and fallout of success, and if you don't mind yet another musician-road movie, you may enjoy this sweet-natured film. But if you want a story, there isn't one really. Consider yourself warned.