As P.D. Ouspensky posited in A New Model of the Universe almost a hundred years ago, time has 3 dimensions, and moves in a spiral fashion. I'll leave it to you to read his argument.

But I believe his theorizing to be accurate because it matches my experience of life: while there is a mostly-linear continuum of events, there are also moments of transcendent presence, and there are the cycles, large and small, in which a turn of the spiral takes us back along a path in many ways familiar, but new. This cycling is a way of gauging one's progress (or lack of it) in life. 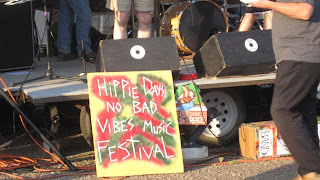 This weekend, we came around a big circle, returning to a part of the world where the Fred & Marigold Odyssey became official in 1981, tying us into a world one might have thought vanished.

Hippie Days? Hippies don't exist any more -- do they?

As it turns out, and as one might have suspected, hippies have just found niches in off-the-beaten-track communities, where the cooperative spirit that animated this counterculture still thrives. Gardner, Colorado is one such place. Hippie Days isn't on the internet, but it is on the grapevine. And so we found out about it, months ago, and by some luck figured out when it was scheduled. We came down from Denver with optimism, copies of Karmafornia to hawk, and a 1970's era book about alternative communities, titled Shelter. 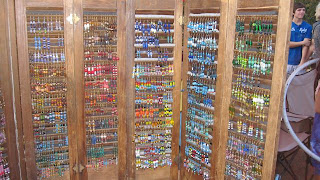 Fred's cousins lived at a commune in the vicinity of Gardner, where he visited them in maybe 1975. At the Hippie Days festival this historical artifact-book connected us with the denizens who shared space there, partied there, and in some cases still live nearby. 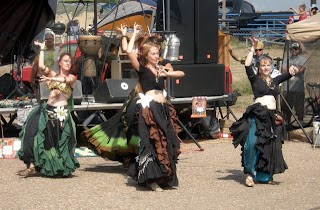 The music was great: Middle Eastern, with belly dancing; a Grateful Dead tribute band; Cajun, with zydeco fun; and the guy in the green head-wrap is the impresario & drummer of the band Planet O which rocked the place with rock'n'roll, reggae and funk with his band: sax, trumpet, keyboards, vocals, lead guitar & bass. 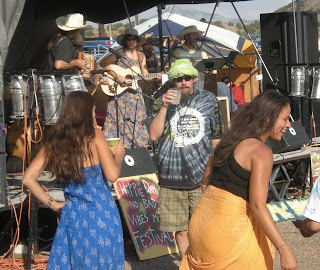 The festival rule was No Bad Vibes, and we encountered none. People of all descriptions, from gray and arthritic 60's flower children to toddlers, vaqueros to bikers, and even the cops, were having a fine time. The teenagers especially gave me hope for the future: these young-uns were cheery, dressing each with his or her personal flair without fear of the Style Police whose insistence on conformity is surely a major contributor to the typically dour & sour teenage state of mind. 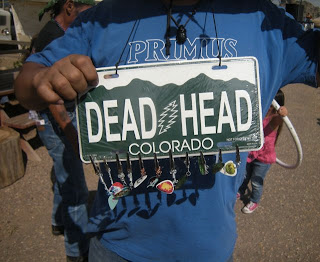 Oh, and it was a good day for Karmafornia sales as well.
Fred and Marigold's big cycle tapped us back into the tribe, with a smile.
Posted by NC Weil at 4:48 PM No comments:

I picked up Call It Sleep at a used bookstore, knowing about it only that Henry Roth wrote it as a young man then didn't write again for forty years.

Set it New York in the 20's, it is an immigrant's tale - David, a 6-year-old boy, arrives with his mother, Genya, to join the father (Albert) he does not know, in Brooklyn then the Lower East Side. This is a Balkanized world - Jews crowd in here, Italians there, Irish over there, Poles in a different block. They don't mingle. David's fascination with images of crucified Christ is a response to novelty. He adores an older Polish Catholic boy not for his age nor ethnicity, but because he lives in a parent-free world and introduces David to the freedom of the rooftops where he flies his kite. That Leo uses and despises him is unimportant - this boy possesses roller skates, and his mobility and adventurousness are a welcome contrast to the cramped circumstances of David's days.

Freudian imagery abounds: David's obsessed association of cellars, closets and darkness with sex and animal urges recurs constantly. His mother is his safe haven from all he fears, beginning with his paranoid angry father but extending to his torment at the hands of bigger boys on the street. Certainly he longs for the Oedipal solution to his misery - for his father to be gone, never to come home, so he can have his mother all to himself. She, it would seem, feels the same way. She serves her husband as women did in a time when marriages were arranged and affection was incidental, but does she want to be with him? As a meal ticket Albert is erratic, getting fired from one job after another because his suspiciousness and volcanic moods alienate everyone around him.

A co-worker befriends Albert and shares tickets to the theater, and it seems this closed angry man will begin to enjoy his life. But Luter is more interested in David's mother, and while the novel never makes it explicit, we sense that Luter and Genya are having an affair. Later we learn that in Austria she had an extended affair with a goy organist, and was married off to Albert soon thereafter, almost as punishment for this transgression.

Her fragmented English traps her in their small Yiddish-speaking neighborhood, and so David is trapped as well. The few times he ventures further - once when he runs away, then cannot find his way back, another time when he wanders to the trash-piles by the trolley tracks and is manhandled by a couple of rough older boys - he senses freedom but is hemmed in by his fears. In the cheder he finds inspiration in a passage, and wants to know more, but cannot communicate his anguished curiosity to the rabbi.

Comic relief arrives in the person of his mother's sister Bertha, a loud aggressive red-head who matches Albert insult for insult, doing battle instead of meekly deferring. One day Bertha takes David to the Metropolitan Museum where, intimidated by the size of the place, they latch onto a pair of unsuspecting visitors they follow from room by room. Finally exhausted by this couple's seemingly endless trek among the exhibits, Bertha and David escape as from the jaws of death, dragging themselves home from the ordeal.

The inner being of a child is vividly evoked - David tries to fit in with other boys, insinuating himself into their games but hovering on the periphery, afraid to be rejected. When he is lost he longs to be in their midst despite their contempt, because they are the world he knows. And this world is a dangerous place: the electrical explosion on the trolley tracks where he drops a piece of metal that bridges one rail to the live wire, haunts his mind and needles him toward further experiment - which proves nearly fatal.

Much of the book is a gritty catalogue of sights, stenches, racket and rudeness - it is only after the halfway mark that a story arc emerges. This narrative builds in power, until in the end we have a very satisfying conclusion: David has survived his curiosity, Albert is humbled, and it seems life will improve in small ways. But the first half of the book is more an atmospheric memoir than a true novel in which character, plot, conflict and resolution play their parts.
Posted by NC Weil at 6:30 PM 1 comment: