Today I saw a query to writers: "How do you overcome writer's block?"
Not an original question - stalling is probably only an hour younger than creating, in the history of human development.

For me, the surest source of inspiration is to employ some other medium than long narrative. Folding origami, for example, is a release for me - uses a different part of the brain, a different type of concentration, than applying words to images. 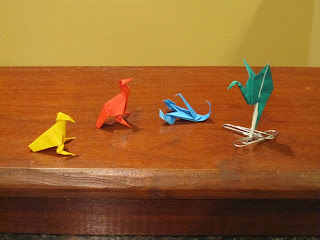 Left to right we have an eagle, a pheasant, a scorpion, a heron.

After I've done some folding, my mind's in a different frame.
Posted by NC Weil at 8:47 PM No comments: 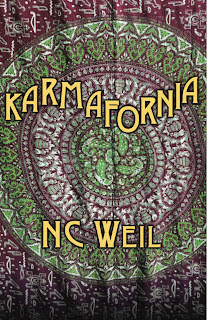 Amid the headaches of creating a publishing entity, there are good moments.
Right now, excitement is building - I'm waiting for the hard-copy proof from the printer.
After working with my designer NZ Graphics to get the images, blurbs, ISBN & barcode, spine etc. set up to look their best and do their job, we have a book cover!

We considered font choices. Concerned with the limited options on my computer, I was thrilled when I visited myfonts.com to see the amazing variety of ways to create a look with mere lettering.
Then we hashed over what was to appear on the cover. Tried a box of rain and it didn't convey anything (a box of rain has significance in the novel). But the Indian-print bedspread was evocative of an era without intruding or causing bafflement.
The waves in the lettering help communicate the characters' ups and downs as well as the ultimate message of the book: not to take things too seriously.

I've lived a long time without needing to have a style guide or even to know what one is (hint: it has nothing to do with wardrobe or hair), but now I have one.
The occasion? Working with my wonderful book designer Nita Congress on the interior layout of Karmafornia, my soon-to-be-released novel.
Which words are hyphenated, which are compound words, which are separated? Do you italicize words from other languages, or does that depend on whether they show up in your favorite dictionary as accepted American lingo?
How do you treat numbers, time, percent, degrees and costs?
What's the best way to represent a character's thoughts?
How about notes and letters?
What about words like mohawk, swiss army knife, kleenex, superball and frisbee?

Why does it matter? Given that language is an imperfect tool of communication, the closer we get to the feeling not just the meaning of words, the better we express what we're trying to. Since writing style is a key element in conveying not just information but flavor, texture and nuance, the way words appear has impact beyond the specifics of meaning.
"No place" is just "place" with a negative. "He had no place in that company" or "Oh, Auntie Em, there's no place like home."
"Noplace" is a negative place. "You're going noplace with that attitude."
How about "OK"? My characters use this word frequently, and it's always OK, never O.K. or okay. Why? Well, for me it's important that such a concise agreement be represented as briefly as possible.

Style can torture - I gave up reading Don Quixote after about 250 pages (out of 1000 or so) because he rarely indents for a new paragraph. Open the book to any page, and you'll see solid print, top to bottom and edge to edge. That's discouraging.
Then there's James Jones. After seeing the 1964 movie starring Jack Warden and Keir Dullea, then Terence Malick's 1998 version which was so different it hardly seemed based on the same story, I decided to read The Thin Red Line. That was agony - it has almost no chapter or section breaks, and the soldiers' names are nearly all words of one syllable, similar in sound: Doll, Bell, Call etc.

Style can woo - At the other extreme is Richard Brautigan's The Hawkline Monster, with such short sentences and brief chapters it's hard to put down: "I'll just read one more, then go to bed," I'd think, and before I knew it, I'd finished the book.

Punctuation is part of style. As a teenager I read Electric Kool-Aid Acid Test, and Tom Wolfe's uninhibited use of colons, italics, exclamation points etc., instilled a freedom I've enjoyed ever since.
Oh, I've been scolded for it. My use of dashes unnerves people. Knowing my writing habits have developed through reading, I revisited one of my favorites - John Crowley - and was gratified to see all his dashes.
How did Ward Just get away with using no quotation marks in The Weather in Berlin?
The undisputed master of the comma is Henry James, who in myriad phrases set off by commas, circles the meaning of an object, or statement, or action, such that when you arrive at the pith of the sentence, you know exactly what he means.

Breaking the rules. In nonfiction other than memoir, standard language is expected: subject is everything.
In fiction however, style is part of the package. Hemingway's short pithy sentences are essential to depicting his blunt masculine characters. The colloquial voices in Jaimy Gordon's Lord of Misrule convey as much as her narrative.
The greatest rule-breaker of all is Herman Melville. In Moby Dick he changes voice, tense, point of view, uses straight narrative, stage directions, and language ranging from the argot of sailors to the biblical and Shakespearean phrasing of Ahab - and it's OK!
Posted by NC Weil at 10:03 PM No comments: 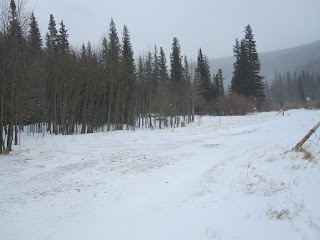 Snowshoeing at the end of April

Yes, winter in the Rockies goes on & on. While down on the flats we enjoy the fragrance of fruit trees in bloom, and contemplate our gardens, a short drive into the foothills finds us in deep snow.

Heinz and I went snowshoeing. We imagined we'd be on the flank of South Arapahoe Peak, but we had to park miles short of the trailhead due to the impassable road. So we hiked as far as seemed reasonable.

When your gear protects you from the wind
and cold, getting out in 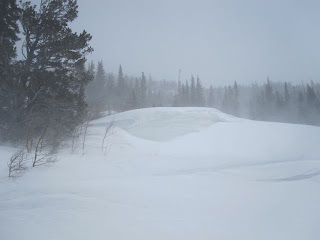 the winter is a delight -
no crowds, tremendous silence, and beauty.
We passed this wind-carved cornice on our trek.
When the trail is under the snow, you just find your way. 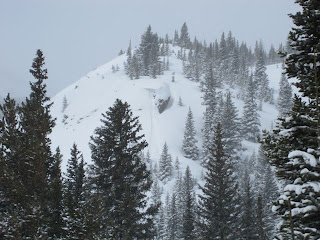 In avalanche country, we admired a small slide on Woodland Mountain from a safe distance: across the valley. (It's in the center of the photo, left of the rock) 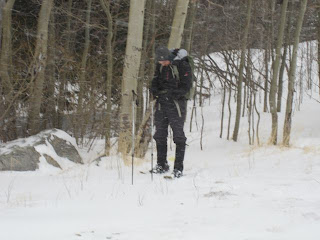 Constantly changing conditions - wind then calm, steep climbs in the trees vs. exposed flats - often required gear changes: put on the wind-proof shell and mittens and face-mask, then take them off and find the gloves and wool shirt, then batten down again...

By the time we returned to the car 6 hours later, the icy road was wet mud and gravel - once the sun came out, things melted fast!
Posted by NC Weil at 3:15 PM No comments: