This movie has both sufficient narrative coherence and trippy footage to give the viewer balanced doses of history and immediacy – which makes it a rousing success. From forty hours of footage shot on the Bus, interlaced with clips from the era, editors Alex Gibney and Alison Ellwood take a shot at making sense of what cameras and tape recorders preserved, knowing that what was in the heads of the participants is well beyond what pictures and sounds are able to convey. And they hit the mark, more often than not.

Starting with Kesey, they dissect 1963, 64, 65. We meet the author of One Flew Over the Cuckoo's Nest and Sometimes a Great Notion, then we see him participating in Stanford's LSD experiments. With visuals culled from Kesey's journals, we get the flavor of that "supervised" trip, even as we shake our heads at the stark conditions under which a person is assumed to behave "normally" before he slips the bonds of external control. Even as he's reveling in a universe unsuspected, the clinicians are asking dull meaningless questions and diligently noting his replies on their clipboards.

The Merry Band of Pranksters opened the way for hippies without being members of that tribe. They were a pretty straight bunch, except they had these drug experiences that blew the lid off the world they were accustomed to, and that lid never fit back on again. What they were, fundamentally, was Americans. Try to imagine Furthur (or Further if you prefer - the bus including its name was repainted many times) anywhere else on this planet, and you know the bus would be confiscated and its crew in jail before they got a mile down the road.

One of the more effective devices the editors employ is to contrast TV clips in black and white, with footage from the Trip in wild vivid color – as good a metaphor as one could hope to find, for the difference between the status quo and these pioneers. Even Timothy Leary's International Federation for Internal Freedom (IFIF) in New York is a black-and-white spot, until the invasion of the Merry Pranksters. And no, he doesn't appreciate his retreat being colorized in anarchic fashion. Richard Alpert (soon to become Ram Dass) hangs out with the Day-Glo visitation while Leary makes himself unavailable.

The voice-overs, culled from the recordings on the bus and ten years later, work with visuals of that unimaginable Trip to immerse us. Gretchen and Jane are matter-of-fact in their recollections of how the world appeared to them – "I was so happy in the pond slime – and it was happy with me," "I was in a dark place and just wanted to be alone with my thoughts" – the effect is both comical and grounding: these people are not insane, they are tripping. They know the difference. But their behavior reinforces the truth: that watching and listening to someone trip, is to know nothing.

The star is Neal Cassady. To see his restless antics and hear his mile-a-minute patter is to recognize the creative catalyst for Kerouac and Kesey both. Cassady is unchained – he does whatever he wants to. The son of a Denver bum mesmerizes all comers: Beats, women, Pranksters, even the cops who just wave him on his way. One can't help noticing that he's up while everyone else slumbers. That isn't just the speed – he's more awake anyway, a man with his fingers jammed in the great socket of life, continuously buzzed.

My only quibble is the editors' detour into the media scare tactics that demonize LSD and its psychedelic cousins. To be sure, some people cracked up – when all the closet doors in the mind fly open, not everyone is happy to see what they've stuffed in there. But in the context of this film, the scolding seems both petty and tangential.

Go see the movie – it's quite a trip. As the Pranksters painted on Further in Phoenix in 1964, "A Vote for Barry is a Vote for Fun!"
Posted by NC Weil at 1:02 AM No comments: 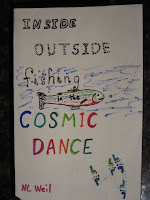 Sometimes we have to stretch and do things we're not so good at - just for the fun of them, and to see what we're capable of.

At the urging of a friend, I took part in Art House Co-op's Sketchbook Project.
I chose a theme from their list, and they mailed me a chapbook in which to do my art.

I never claimed to be skilled at drawing but I certainly had a good time!
The whole book is here -
Fishing in the Cosmic Dancehttps://www.sketchbookproject.com/library/5190
So enjoy! I sure did!
Posted by NC Weil at 2:40 PM No comments:


Review of Karmafornia, a novel by NC Weil

From the image of an Indian bedspread print on the cover through the trials and tribulations of the twenty-something main characters, Weil gives us descriptive details of a culturally and politically volatile Berkeley during the late seventies interspersed with national and local current events to weave a colorful and compelling story.

When Laura and her boyfriend Walt are trapped in a snowstorm on their way to Berkeley where Laura is to begin graduate school, they take LSD and “fly together,” becoming mentally and spiritually one. But when they arrive, Laura becomes attracted to Cob, a student in her program, and he convinces her to become a fruitarian and get off the pill to make herself more physically appealing. Outlandish as this may sound in light of the fact that Laura is an independent woman, Cob is convincing, and Laura complies. So begins the love and sex triangle that sets the theme for this rip-roaring book that culminates in a surprise ending.

If you want to reminisce about Berkeley during the period of the Jonestown massacres, the shooting of Harvey Milk, the Dead Kennedys and “Box of Rain” with a hefty dose of drugs and sex, or if you just want a good read about that period, the tightly written and thought-provoking Karmafornia will engross you.

Lorine Kritzer Pergament's stories have appeared in "Bridges" and "Penn-Union," and she was a winner in the 2008 F. Scott Fitzgerald Short Story Contest. Her story "Smell the Roses on Your Own Time," will be included in "Amazing Graces," Richard Peabody's anthology of Washington area women writers in December, 2011. Lorine also writes book reviews and is a member of the Women's National Book Association's Great Group Reads panel.