30 years ago Fred and I hiked Long's Peak in Rocky Mtn Nat'l Park. You can't do that any more.
These days, you have to CLIMB. 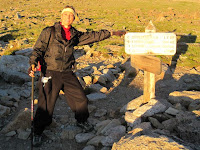 th son Heinz, I did. At 3:30 am we got the last parking space in the lot at the trail head. Headlamps on, we hiked up the trail.


The sign says it's 7.5 miles - which would apply if it was a hike. But the last 2 miles are rock scrambling: 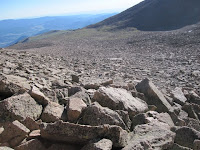 Boulderfield (just what it sounds like);
(From Boulderfield on it is not a hike. Rocks tip and slide, thousands of boots have polished footholds, and from the Keyhole, it's mostly hands-and-feet climbing.) 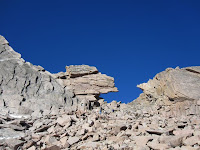 (pictured here on the approach from Boulderfield - a climb up tippy slabs of rock. Up there, the wind is fierce - but past the Keyhole you can put away your windbreaker.) 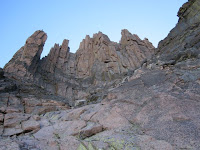 Ledges (from here you look up at Keyboard of the Winds, a craggy distraction from groping along the route from one "fried egg" mark on the rock to the next);


followed by the Troug 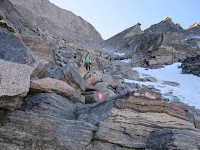 h which still has some snow/ice in it from heavy late storms (Just 2 days ago RMNP took down the sign requiring ice gear to summit); (Fred and I remembered the Trough as a high-altitude-gain plod, one foot in front of the other up a steep trail. Now it's clogged with rock-fall and gravel which make it slippery and dangerous both to step on and for anyone below. 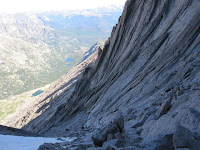 There's a lot of below.
At the top of the Trough were some tricky rock climbing moves - I wished I were roped in. But Heinz, an experienced climber, gave me a hand negotiating the scary part, so I made it.
This is the view from up there.

Then one negotiates The Narrows, a series of moves on a steep exposed massif. 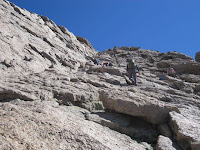 Now we're looking up at the Homestretch - a climb of another 150 feet will get us on top.


Heinz and I have arrived! 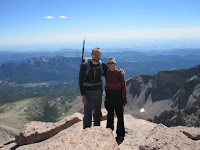 Long's is the tallest point for miles, 14,255 according to the USGS benchmark.
It's also a fearsome peak - you would not want to be there in rain, wind or a thunderstorm. In fact, you wouldn't want to be anywhere above timberline on this rocky mountain in bad weather. 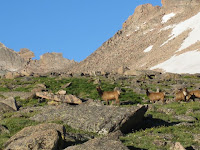 But we saw plenty of wildlife: a herd of elk, marmots everywhere, pikas (an alpine rodent resembling a chinchilla), ravens, swifts, other small birds and even a ptarmigan. The marmots were plentiful and we wondered what they eat on the rocky summit of Long's - but there they were. 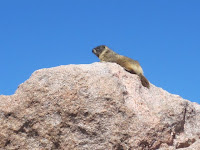 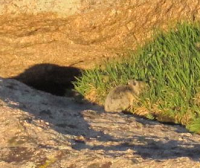