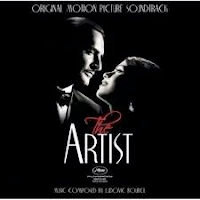 
The Artist, Directed by Michel Hazanavicius

This is a faithful film: faithful to the silents, faithful to the transitional era into talkies, faithful to the starry-eyed plots of those movies, faithful to the conceits of Hollywood. And it's faithful to older stars who could use some publicity. Malcolm McDowell, for example, gets high mention in the billing. His part consists of sitting on a bench awaiting his casting call, so the ingenue can show someone her Variety front-page photograph cheek-to-cheek with George Valentin, a matinee idol played by Jean Dujardin. That's it for Mr. McDowell. A more substantial role is given to James Cromwell as Valentin's faithful chauffeur, though he gets lower billing. Yes, it's faithful to Hollywood's conceits, all right.

Likewise, Valentin, a cross between Rudolph Valentino and Douglas Fairbanks, Sr., is enamored principally of himself – his favorite possession is an enormous painting of himself flashing his famous smile. And he does have a charming smile. The success of this picture is in large part thanks to its cast – these vivacious people win us over with their beautiful smiles. Berenice Bejo is a fresh, energetic, delightful sylph, and her screen name Peppy Miller fits perfectly – it fits the era, and it suits her. She's a face in the crowd when she drops her pocketbook, then bumping into Valentin, she trades on this momentary encounter and plenty of chutzpah to put herself in the studio and in front of John Goodman, who's perfect in his part as director.

The system moves only forward, and by staying in silents, Valentin consigns himself to obscurity. The technology change is heartless, but the people using it are anything but: we see smiles as Peppy works her way up, we see Goodman trying to convince Valentin to take speaking roles, we see cheer and bustle – this is not a tale of a Louis B. Mayer of whom it was said that people came to his funeral to make sure he was dead.

There are some incongruities: after Valentin has witnessed the auction at which all his furnishings are sold off and the manager cheerfully informs him he has nothing left, the fallen star goes home to his apartment and screens a movie – he has a projector and many cans of film-reels. What? In a previous scene he's pawned even his beloved tux so he can buy more booze and cigarettes. Then once he's watched the movie, he rages, flinging film-cans off the shelf, unspooling film then setting fire to the whole mess. It takes forever for his smart little dog to race blocks and get the attention of a cop, who then runs to save Valentin. That was already a big smoky fire by the time the dog left the apartment – it strained my credulity that Valentin was still alive when his rescuer arrived, and also that the cop could make it through all that smoke. And later in the movie Valentin returns to live in that smoked-out apartment. Really? A man who set a fire in his room is allowed back there? It's still habitable?

But hey, that's part and parcel of silents – cliffhangers were standard procedure, and melodrama trumped plausibility. We can forgive this silliness. Now, what about the film's title? Is The Artist an archetype, so that we can include both Valentin and Peppy? Or does it refer strictly to him? Or does Peppy, whose rise we witness, become The Artist? Not clear.

Seeing the preview twice, I had the impression Valentin's character evolves. Nope. He remains a narcissist, happy at last because the cameras are on him again. Peppy goes from a nobody to a star, but nothing essential in her changes – she's the same good-hearted razzle-dazzle beauty at the end, that we first saw.

Hazanavicius trowels on the symbolism: when Peppy is well on her way to becoming a star, she encounters Valentin on an open stairwell at the studio. She's on a step above him, so she talks and looks down as they converse. When they part, she goes up, he goes down. (I get it! She's moving up in the world and he's sinking!) The titles of films set the mood of the scenes they're embedded in, cleverly but without much subtlety. Mirrors are used frequently. Peppy writes "thank you" on Valentin's dressing-room mirror; he tells her a great actress must have a beauty spot, and, seen in his mirror, applies her first one; when he's drunk and self-pitying he pours the rest of his drink on a tabletop mirror, and the pool of booze becomes yet another mirror. Mirrors are Valentin's only friend – he loves to look at himself. Peppy vamps in hers too. For all that, the movie itself is curiously lacking reflection. We see the impact of the stock market crash on Valentin, but nothing about its larger effects, not even how that changed the movie fare studios put out. You would never know from The Artist that large numbers of people were thrown out of work.

I'd like to take this opportunity to speak out against film trailers (why are previews called trailers anyway? They don't trail the movie, they lead) – several sweet moments are given away, which robs them of their charm when they occur in the story: Peppy finds Valentin's dressing room, empty, and snuggles up to his jacket on a coat-rack, puts one arm into a sleeve and pretends it's his arm, feeling her up then giving her a warm hug. Very sweet moment, and witty if you haven't seen it done before (I saw it in a Cirque du Soleil routine years ago) – but it's in the preview. When the moment arrives, you sit there thinking "I've seen this." Likewise, Valentin in poverty stands in front of a shop window display of a tuxedo. His reflection and the tuxedo's are superimposed, in a very nice touch - except it's in the preview so it's no surprise. Indeed, their meet-cute moment, when she bumps him as she picks up her pocketbook off the sidewalk in front of a theater where he's just premiered a new movie, is also spoiled by the preview. If studios can't live without trailers, confine them instead to pictures of the stars in their film costumes, while a voice-over offers a brief synopsis. That way the movie can surprise and delight us.

So, as to awards. Should The Artist win Oscars? The movie is a love letter to an era, sweetly done but a trifle: NO. The costumes are wonderful! YES. Bernice Bejo has a face that's pretty in an enchanting way, and when she dances we admire her quickness and form, but how much of that was acting and how much just her? NO. Jean Dujardin doesn't act much – mostly he smokes, drinks and smiles. We like him because those Errol-Flynn-quality smiles charm us to our marrow, but: NO. Supporting character James Cromwell looks after Valentin like a dutiful mother (NO), and John Goodman does a fine job as the cigar-chomping Director (he's had stronger roles):NO. I say give the gold statuette to Malcolm McDowell for his coup, getting second-star billing for his tiny part.