Colorado is on fire this summer, a situation likely to worsen as light winter and early heat exacerbate our desert climate. This seems a good time to reflect on what wildfire does, good and bad. 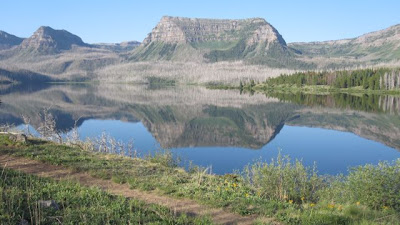 This last week Fred and I went camping in an area where forest fires swept through ten years ago (2002 was as dry as 2012). Trappers Lake became popular in the 1930's and 40's with visitors escaping the summer heat of Texas and the Midwest. My parents started taking fishing vacations here in the 40's, and in 1999 celebrated their 50th wedding anniversary with a family trip to the lake.

I hadn't been back since, and my brother warned me the fire had changed everything.

Well, my first memory of Trappers is of the silvery sheen of dead trees, killed in the early 40's by the spruce beetle. Over time, live trees have greened up the area somewhat, but those dense stands of deadwood enabled the 2002 conflagration known as Big Fish Fire. Ten years later, what we see are bare trunks, standing or fallen, and among them new growth.

Few aspen grew around Trappers before, because the spruce formed what geographers call a "climax forest" - once certain vegetation dominate, they make an area inhospitable to other species by changing the soil acidity and forming a light-blocking overstory.
But now those spruce are out of the way. Oh sure, there are lots of dead trunks, but among them grow berry bushes, chaparral, abundant wildflowers - and aspen and Douglas fir are coming in. Birds are plentiful, along with mammals small and large. The plants thriving now will transform this forest into one which will over time be more beautiful, to many eyes. 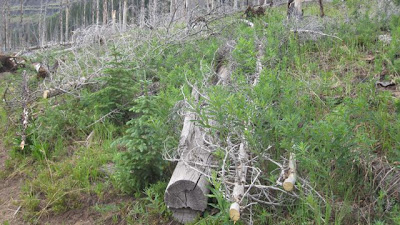 Yes, those charred stands look like stubble, and it's difficult to walk through the burn areas where trees have fallen all directions. It's dangerous too, because any wind will knock down the standing trunks, and it's hot in the absence of shade. But in ten more years this will be a beautiful place again, a mixed forest. We'll see hillside meadows dappled with aspen, which in the autumn will shimmer gold against deep blue skies. 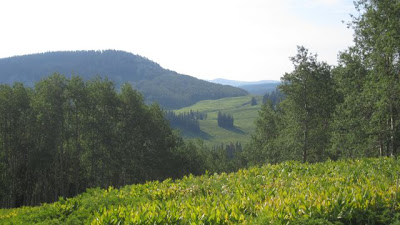 From that vantage, we may even be able to appreciate the fire.
Posted by NC Weil at 10:47 PM No comments: