In the morning we take possession of our new (to us - built in 1927) home - and its big purple recycling bin!
Since April we've been recycling orphans, lugging along our bags of newspapers, junk mail, bottles & cans to such diverse locations as Boulder's Eco-Cycle (the pinnacle of recycling), Allenspark's drop-off, the bins of Heinz and other friends, and Denver's waste & recycling facility.
I've been told "Just throw it in the dumpster!" - but I can't. It's wrong.
Yes, Denver offers curbside recycling. However, for buildings with more than 2 units, such as ours, different rules apply. The property management company rep said they're forbidden to offer recycling. I doubt that, but they certainly aren't giving us the option. After being caught red-handed dropping my stuff next door (and yelled at, and threatened with a $500 fine) I ranged further afield. Denver's recycling referral website has many obsolete drop-off places listed. The only one nearby still operating is the neighborhood Whole Foods - but clearly those bins are for a newspaper here, a soda can there - not my weekly accumulation.
So one of the aesthetic points of our new abode is that big purple bin - tomorrow I'm taking my overflowing bags and buckets over there - an orphan no more!
Posted by NC Weil at 9:41 PM No comments: 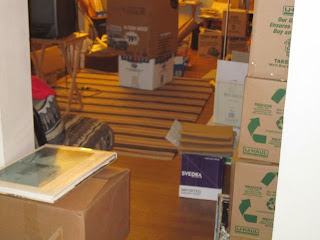 Thoughts on Five Tons of Stuff

When I go see my sewing machine
Languishing in dust and grit
I don't dare ask it "How've you been?"
I'd never hear the end of it.
But pretty soon I'll bring my crew
and go down to the Storage Zone
and rescue books and dishes too
to join us in our Cherry home.

When we unpack five tons of things
What will we find worth hauling here?
We're hoping that the effort brings
A fine finale to this year -
We'll lug stuff home and put it away
And celebrate - it's home to stay!
Posted by NC Weil at 9:10 PM No comments:

The Russians invented editing because they lacked film stock - they had to splice pieces together after they'd been shot, and a new way of storytelling was born. Eisenstein's famous scene of the killing of a bull intercut with the slaughter of peasants, revolutionized film-making.
But there was more to the Russian sensibility - an improvised survival and dignity versus murderous odds. Imaginative directors found symbols useful when straightforward dissatisfaction could end their careers. Andrei Tarkovski's great films - Andrei Rublev, The Mirror, Stalker - told stories that both dodged the censors and celebrated the Russian feat of survival. Sergei Bondarchuk's magnificent four-part War and Peace, released in 1969 after 8 years of filming, was the most costly film ever made (over $100 million then, around $700 million today), with a running time just over 8 hours. The first two parts are as beautiful as Tolstoy's language. The third and fourth parts bow to Soviet triumphalism - but make a magnificent work nonetheless.
And along the way there are humble films - The Ascent by Larisa Shepiko follows a group of WWII partisans hiding in the forest. When two are captured (one robust and cheery, the other weak and moody), we think we know which will betray his fellows under torture. But the story plays past the ending we expect, searing our spirits.
This year's How I Ended This Summer by Alexei Popogrebski is another gem in the rough-cut Russian style. A seasoned man (Sergei) tends a coastal Arctic weather station, assisted in the summer by a bored youth (Pavel/Pasha). While Sergei meticulously records and transmits weather data, Pavel amuses himself in childish fashion: stalking a rabbit, leaping from one empty fuel barrel to the next, playing video games on the station's computer, listening to rock on his headphones. He seems like any happy-go-lucky youth making the best of a dull situation. But when the moment arises to give Sergei some bad news, he lets every circumstance deflect him. As the secret looms larger between them, Pavel fearing the older man's wrath cannot bring himself to reveal it. The burden unbalances Pavel's restless mind, tilting the pair toward violence. Dwarfing their human troubles are the vast tundra, icy sea and immense sky. While our sympathies start with the young man enduring desolation, as the story progresses we realize the true hero is Sergei, who tends this weather station as his life's purpose. Even his contempt for Pavel's sloppy work is subsumed in his love of the place - he cannot hold a grudge.
Posted by NC Weil at 9:16 PM No comments: