I thought I'd be blogging more but I've been enjoying my travels & encounters too much! 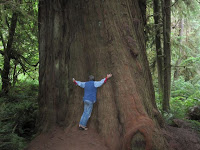 Visit with a long-time friend in Eugene - hadn't seen her for decades, but we just picked up where we left off.
Then over to the Pacific and down the coast into the redwoods - camped in the forest then drove through Avenue of the Giants where I had to hug & kiss one of those ancient wonders. 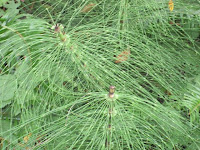 Among the giant trees are horsetails, one of the most primitive of plants (dinosaurs ate them). They make a fine contrast to their immense neighbors.

Across the Trinity Alps into Redding, then to Mt. Lassen Nat Park for a hike into Bumpass Hell.
This completed our volcanic vista trifecta - Craters of the Moon in Idaho (giant lava flows and weird formations), then Crater Lake formed in the collapse of a massive volcano 7700 years ago (in the historical memory of the Klamath tribe), and now the youngest of them all, seething, spewing and sulfurous, Mt. Lassen. 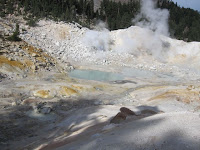 Arriving in the evening in Chico we took up residence with friends I haven't seen in 25 years. Shared stories, rode bicycles and devoured the most marvelous tomatoes in the world (so ripe they remind one tomatoes are fruit - sweet!).


Friday evening attended a potluck at another friend's house where I gave a reading and sold the most copies of Karmafornia yet on this journey.
So far the calling card that gets the most attention is that the chapter on New Wave (punk rock) music was vetted by my friend Jello Biafra.

Sunday I came along to a woman's 65th birthday party, attended by a group of adventurous creative older women (and some younger ones).

Tomorrow I'm selling books at San Francisco Arts Market down by the Civic Center - hope to see you there!
Posted by NC Weil at 1:36 PM