OK, now it's summer and the Fun & Games promised have not made an appearance.
But July, at least for me, has been the month when I turn to the fresh calendar page and see not a deluge of busyness but inviting pools - visits from friends, a picnic, a long weekend fishing.
So, on with today's game:

The letters were coming my way, and I put down JESTINGS (good for 92) to get things going with a bang. 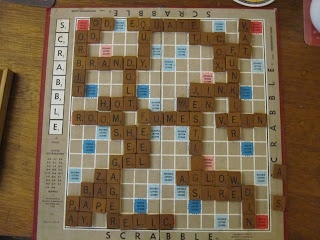 Two turns later I put down FUNKIER, for 97.
Fred made ZAP, ZA, AG and PE for 49.
I made COX, OF and XU for 47 plus an aesthetic point for landing the X on the double word square.
At some point my letter luck was annoying Fred, so in the corner he ODd multiple times, his way of asking for an end to it. I gave him a sad point for that.
At the end I had tray-dump potential but could never pull out the word.
Letters: AINUSD & blank. The only place to put it was across the N on the right edge.
Even with the blank I couldn't get a word out of it, which would have propelled me beyond 500, in the rarefied air where I have not yet climbed.
Had to settle for 465, and Fred was happy to have 313.
So if you see the word I couldn't find for that final flourish, add your comment!
Posted by NC Weil at 7:56 PM