Sounds like the newest literary mag, doesn't it? But a gong bath is actually a sonic/ vibrational experience. When I read an article about it in the Denver Post a couple of weeks ago I knew Fred and I had to go. It was held in a large high-ceiling yoga studio with hardwood floors, and the pair of gongs (38" in diameter apiece) were set up in the center. Blankets and mats set edge to edge filled the room, and when people settled under their covers it looked like a giant slumber party.
Preparations took awhile but finally Richard Rudis spoke briefly about what we could expect, and what we should not busy our minds thinking about during the gong bath: Expect vibrations, a connection between physical and transcendental selves, calming, healing, clarity. Don't worry about the mechanics: how sounds and vibrations are being produced, the characteristics of the bells, bowls and gongs. Make sure not to place your feet where they will be in line with the head of anyone in the next row (in order to prevent purged energy from passing into someone else).
Then Rudis struck a small bell three times to signal the beginning, played a bowl to deepen the vibration, then proceeded to play the pair of gongs. Since I didn't watch him I can't tell you how he produced the tides, clouds, blizzards of sound - but I felt the results.
At first, the air in my lungs vibrated, then my muscles and bones. These waves increased and diminished with the intensity of sound for a while, then quite abruptly I felt them cease, and my spirit, clear and clean, captured my awareness.
The gonging is not melodic or musical, it is cascading sound, rising and fading in power. Sometimes I could hear hissing (as if he was using a brush against the gong surface) or a patting sound, but most of the time I heard not muffled hammers striking the metal but only the vibrations resulting from that contact. Sound traveling to walls and back, through people, between gongs, added to the wave complexity. A deaf person would have essentially the same experience as a hearing person, because it's physical not aural.
To conclude (after 90 minutes), he played the bowl again, then the small bell three times. Speaking quietly in the dimly-lit room while we settled back into our accustomed selves, he suggested taking a hot epsom salts bath followed by a cool pore-closing rinse, and drinking plenty of water. He talked about sacred sound, differentiating it from music and from dogma.

The next morning son Heinz and I took a high-altitude hike up Twin Sisters (we'll be climbing Long's Peak later this summer so we're getting in shape for the distance and altitude), and were surprised by my looseness, ease of motion, lightness and energy. We hiked about 4 miles from 8700 ft to 11,400 in 2 hours, then after a snack and rest at the summit, hiked back to the car in another hour and a half. Arriving at the bottom, I wasn't even tired. My shoulders, which have been tight as guitar strings for weeks if not months, are quite relaxed. 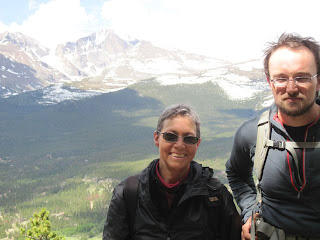 So if you have the opportunity to be in a room where a gong bath is taking place, do it!
Posted by NC Weil at 10:39 PM