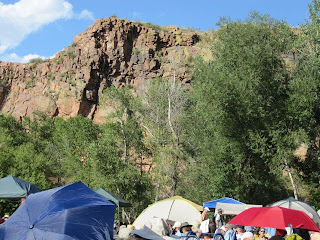 Fred and I went to the Rocky
Mountain Folks Festival in
Lyons CO over the weekend.
The festival grounds are great -
the North St. Vrain River
coming along between cliffs
and the field - bring your kids,
and they can exhaust themselves
while soaking up some music,
splashing in the wide shallow river,
down among the cottonwoods.
Good food, lots of cooperation on reducing waste, a gorgeous sunny weekend
under lapis Colorado skies - some spectacular sunburns!


The headliner was John Prine, who played last - Sunday night. We went Saturday, and heard Dala, Marc Cohn, Jenny Lewis, and then left for the eve. 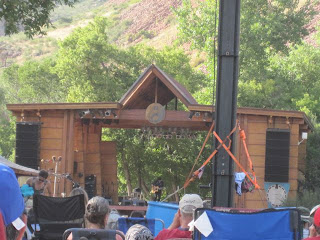 Sunday, wristbands in place, we walked in with chairs for the opening set: Abby and Bela - Bela Fleck and Abigail Washburn. When they finished, we left, chairs holding our spot, for a brief hike. We returned during Michelle Shocked's set, followed by
Richard Thompson (think that's him onstage)
and The Waifs.


Storm Clouds danced around us but unlike our 2007 Rocky Grass experience (same venue), we never got more than a dash - while towns to the east got clobbered with heavy rain, wind, etc. 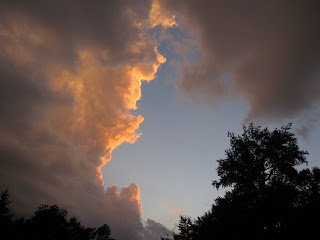 I guess the sky gods knew John Prine doesn't need that kind of stuff going on - he's paid his dues.

That last song has some Prine Gems in it - give a listen!
Posted by NC Weil at 9:45 PM