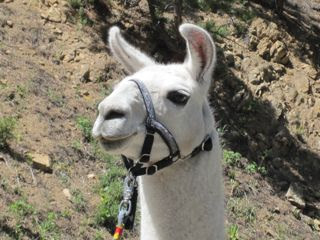 Fred and I like Low Pressure Zones, so we spent Independence Day weekend unplugged and off the grid in a friend's mountain cabin. Car full of provisions and gear, we headed west on the sunny Saturday, our first stop to fill water bottles (cabin though well-appointed lacks plumbing, electricity, gas) - but our approach to the spring coincided with the Allenspark parade. We hadn't planned to attend any festivities but there it was, so we did.
Highlights for us were the pack llamas, horses with flags and stars painted on their flanks, and fire trucks spraying water on the audience. A band on a wagon played Stars and Stripes Forever, a teenager balanced his bike on its rear wheel as he pedaled slowly down the road, and a front-end loader saluted the crowd, raising and lowering its scoop as it went. 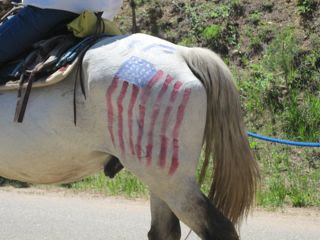 At the cabin we rigged and went fishing in the nearby creek's occasional small fishing holes where a rock or log-jam would create a backwater no more than two feet across.
My nine foot fly-rod was perfect for reaching through brush and trees, to hover a fly in an eddy.
I caught two brookies for dinner. Fresh wild trout are incomparable - we had a sundown feast, gazing west on the cabin's deck. 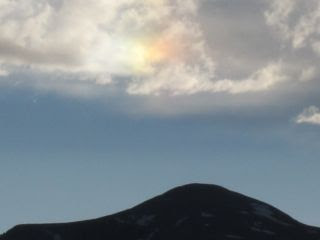 And there we were treated to a sunbow - a rainbow of ice crystals in a thin cloud, lighting up with a spectrum of colors: our Aesthetic Point to cap off a fine day.

The next day was misty - I caught and threw back a small pair, further refuta 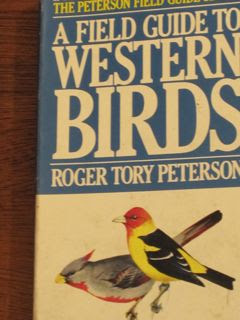 tion to the neighbor who informed us there were no fish in that creek.


Walking back to the cabin, we saw a western tanager, a spectacular mid-sized bird with yellow breast and back, orange head and black wings. He's actually the Cover Bird of Roger Tory Peterson's Field Guide to Western Birds.


On Monday we drove to a nearby lake for a short hike, then into town to dine. At the bar we had front-row seats for a boiling dispute between waitri, one accusing the other of poaching tables. Fred offered a joke, the waitress countered with another, and she concluded it wasn't necessary to kill her co-worker, proving once again:
Levity is the highest form of gravity.
Posted by NC Weil at 11:01 PM